Collectibles and Bankruptcy: Keep Your Hands off My Princess Diana Beanie Baby

Everyone possesses something that carries with it great emotional value. It can be a possession we cherish, put on display, tell others its worth, and maintain even as years – decades, even – pass. Some are willing to spend extraordinary amounts of money to get a hold of a collector’s item. Old Civil War weapons, old car models, old film props – all are collector’s items worth thousands to the average collector but worth all the money in the world to those who treasure them.

Such was the case with one client of ours who filed for bankruptcy. As she listed up her assets, she discussed one valuable collector’s item she wanted us to keep safe at all costs: a purple Beanie Baby Bear. It soon became apparent that this collector’s item carried with it incredible financial value. 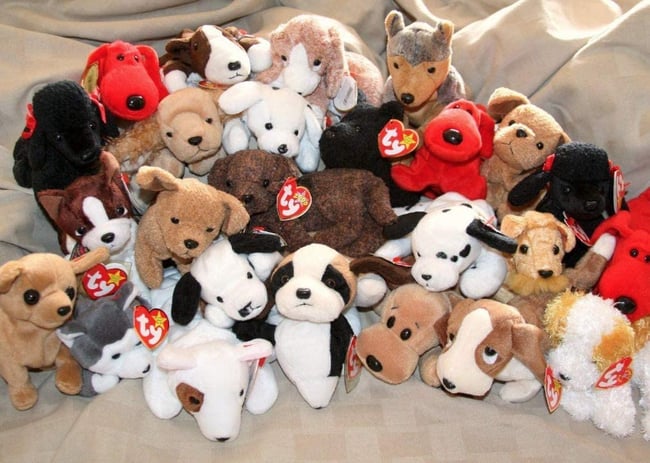 Beanie Babies are exceptional in the history of popular fads. Often, toy lines close down production after a few years of distribution. Beanie Babies, however, found a life of their own, maintaining popularity into the present day.

Created by American businessman H. Ty Warner and his company Ty Inc back in 1993, Beanie Babies innovated on the typical plushie formula. Most stuffed animals used soft, cotton-like stuffing. However, Warner’s Beanie Babies used instead soft-plastic pellets – also known as PVC pellets. This meant that his plushies could maintain somewhat flexible. In Warner’s own words, “The whole idea was it looked real because it moved.” This endeavor resulted in Warner becoming a billionaire and one of the most successful figures in the toy industry.

During the 1990s, Beanie Babies became a must-buy toy for collectors and toy enthusiasts everywhere. The popularity of the toy line is owed to several factors that made otherwise nearly identical plushies highly individualized and unique, even when comparing the one to an otherwise identical Beanie Baby.

Ty Inc released Beanie Babies with their own special swing tag that gave some info about the plushie, like its name, a poem, and “date of birth.” The initial line of Beanie Baby plushies consisted of nine core plushies: Legs the Frog, Squealer the Pig, Spot the Dog, Flash the Dolphin, Splash the Whale, Chocolate the Moose, Patti the Platypus, Brownie the Bear, and Pinchers the Lobster.

However, almost immediately, two things occurred that led to the Babies gaining extra value. Brownie the Bear was later renamed to Cubbie the Bear, and some versions of Pinchers came with a misprinted tag that called him “Punchers.” This line would be retired after a few years to be replaced with a new line. However, production for the toys did not meet the demand. It didn’t help that Beanie Babies were only sold in small locations at first, adding to the toy’s sense of mystique.

The rarity of these Beanie Babies made them appealing, but what made them more appealing was how, thanks to the new-found popularity of the internet, word spread about rare Beanie Babies, such as the misprinted “Punchie the Lobster.” People already wanted the rare lobster Beanie Baby, but they really wanted a special super rare Beanie Baby that almost no one else has – and they’d be willing to spend extra cash to get it.

This led to a market of people hunting for rare Beanie Babies, both for the sentimental value of having something so rare and for the sake of collecting them in-case their value increased. Unlike the speculator boom for comic books during the 1990s, Ty Inc never overproduced their product, which meant that some toys became desirable due to their rarity.

For many collectors, Beanie Babies were rare toys you had to pour passion, money, and effort into finding, and, once the line ended, that was it. You had something unique. For some, when the 90s ended, the passion fizzled out. However, there remains today an avid community of collectors who value Beanie Babies. It’s rare you find that much continued love given to a toy like that.

Our Client and her Special Purple Beanie Baby

This leads us to our client, whose name and identity will remain anonymous. Our client had decided to file for bankruptcy. Bankruptcy relief is a valuable resource to debtors unable to pay creditors. However, before we file a bankruptcy case, we meet with clients and discuss their assets, debts, etc.
During this meeting, we ask the client if she has any possessions or collectibles that might be of great monetary value. When dealing with bankruptcy, it’s important to make a catalog of a client’s possessions.

In the vast amount of bankruptcy cases, debtors do not sell off any of their assets. Many debtors entering into bankruptcy fear creditors or trustees repossessing their possessions. This fear is unfounded. In the vast majority of bankruptcies, debtors walk away without ever selling any of their assets. However, if a debtor possesses something that is of excessive equity, such as an unoccupied second house, that property can be sold in order to satisfy a great deal of debts simultaneously.

Our client possessed one noteworthy collectible: a Princess Diana Purple Bear Beanie Baby. She claims the plushie is worth at least $15,000 and has no desire to part with this object of great sentimental importance to her. As lawyers, we had to determine two things: how much was this Beanie Baby worth and, more importantly, could she retain hold of this incredibly sentimental plushie?

The Value of Princess Diana 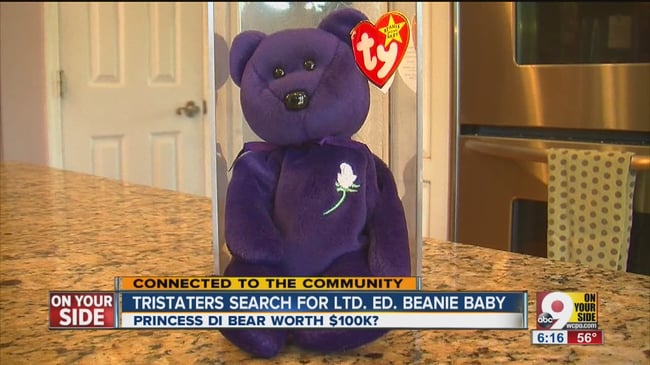 When preparing for a Bankruptcy Case, it’s vital to gain a complete understanding of a client’s financial assets. This became complicated when appraising the value of this plushie, due to how many factors went in to determining its price. Our client believed it to be $15,000, but we had to start with the working understanding that most Beanie Babies today could be sold for a small fee.

Issued in 1997 in honor of the late-Princess Diana with consent by the Diana Foundation, the Princess Beanie Baby plushies were touted as a limited release and incredibly valuable. The secondary market, mere months after its release, would sell the plush toys for over $200, sometimes $300. The price has since gone up, even though it’s unknown just how many of these plushies were produced.

In making these plushies, Ty Inc capitalized on the emotional devastation left in the wake of Princess Diana’s passing. Princess Diana passed on August 31, 1997, while the Beanie Baby was announced on October 27, 1997, then released December that same year. Because of the toy’s manufactured rarity and emotional resonance, people really saw the toy as incredibly valuable, both as an emotional keepsake and collector’s item.

So, for our client, this was a rare valuable. But how valuable was it really?

The truth is that on eBay, numerous Princess Diana plushies are sold for sometimes absurdly high or absurdly low prices. In 2015, several collectors were tricked into paying over $300,000 for several Princess Diana Beanie Babies, which, even by our client’s highest estimates for her own plushie, is an absurdly high price. It does not help that many of the plushies sold on eBay auctions are counterfeit. In order to appraise our client’s plushie, we needed to see it and study its swing tag, its date of creation, along with numerous other elements.

Appraising the Beanie Baby’s price involved closely scrutinizing the swing tag of the toy. There are multiple different ways the tags are printed. Some swing tags include distinctive swing tags and odd spacing. The following picture is an original production from China: 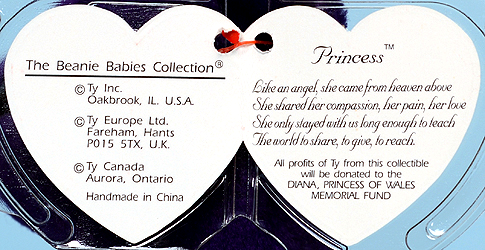 This first edition tag is referred to as a “no-space” tag, which means that, unlike later editions, there is no line space before the line that reads “Diana, Princess of Wales.” To collectors, no-space tags indicate the plushie is far more valuable than a “space” tag. These are just one of the many factors that collectors of Beanie Babies consider when selling or collecting these toys.

After scrutinizing the tag while consulting other Beanie Baby collectors, we determined that her Beanie Baby was not valued at $15,000. Despite the rumors of the Princess Diana’s rarity, it is far from as rare as people often believe it to be, even with counterfeits on market. Some sellers value the common “space” Princess Beanie Babies at $50 dollars.

Our client’s Beanie Baby, however, was not a common bear. While the bear was priceless to her, we determined that it could be sold to collectors for about $3,500. 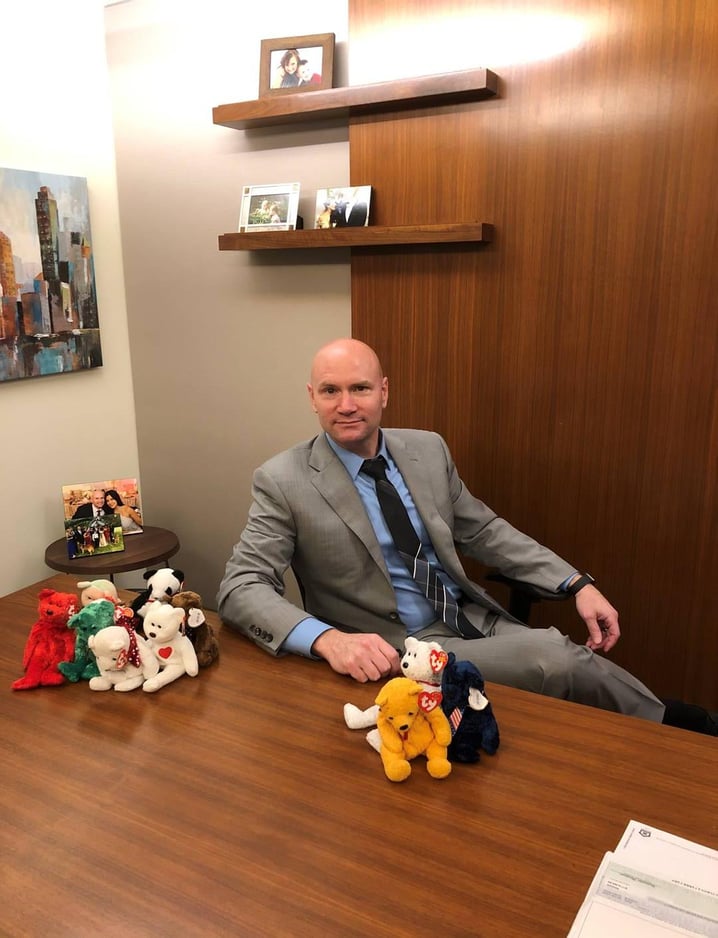 However, our client could not bear to part with her bear. To her, it did not matter if the plushie was worth $50, $3,500, or $15,000. To her, this collector’s item is a sentimental treasure. You can’t put a price on emotion. This raised a question: can you refuse to sell-off or auction an asset in a bankruptcy case because its emotional value supersedes its monetary value?

Bankruptcy law was created to be fair to both creditors and debtors. Exemptions exist in both Chapter 7 and Chapter 13 Bankruptcy for individuals that protects the debtor’s property and possessions. These laws protect a debtor’s property. However, it also assures creditors that, in the event a debtor is in possession of luxury property that can only be maintained by withholding owed money from creditors, creditors receive their fair dues.

In the case of our client, her Princess Beanie Baby managed to be exempt. While it was worth a significant amount of money, it was not of such great monetary value that she would have been withholding due funds from creditors. Ironically, it being worth less than the client’s initial estimate of $15,000 worked in her favor.

Thankfully, the result to this story is a happy one. Our client was able to shed her debt and recover financially without losing her Princess Beanie Baby. The collector’s item, far more valuable than most people would expect on the onset of the case, remains in her care and protection. She managed to find a way to maintain control of something precious to her while never needing to trade that possession in to settle her debts.

Bankruptcy is a complicated process. When filing, it’s vital to consult a lawyer to know how to properly manage your assets while still maintaining control over your finances. If you have any concerns about bankruptcy, you might want to have a consultation with a legal team that knows what they’re doing. The attorneys at Scura, Wigfield, Heyer, Stevens & Cammarota, LLP, can help. Please call our offices to schedule a free consultation and hear your options.