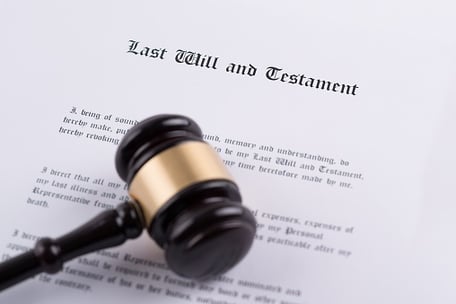 In the typical will contest, a party seeks to invalidate a decedent’s will due to an alleged lack of testamentary capacity and/or undue influence. The battle is often exclusively fought on these two fronts. For purposes of this article, we shall assume there exists a will meeting New Jersey’s statutory formalities. The good news for those seeking to invalidate a will is that proving either lack of testamentary capacity or undue influence is sufficient to prevail. The bad news is that you must overcome the legal presumption that a testator is of sound mind and competent when he or she executed the will.

In re Craft’s Estate, 85 N.J. Eq. 228 (prerog. 1930). Whether a contester or proponent of the will, both parties face the same challenge in that the most important witness, the testator, is unavailable to testify. So, how does one prove that despite the decedent’s signature appearing on a facially valid will, that the dispositions contained in that same will were not made of the decedent’s own free will?

The point of time at which testamentary capacity is to be tested is at the execution of the will. Gellert v. Livingston, 5 N.J. 65 (1950). The gauge of testamentary capacity is whether the testator can comprehend the property she is about to dispose of; the natural objects of his bounty, the meaning of the business in which he is engaged; the relation of each of these factors to the others; and the distribution made by the will. Id. at 73. Old age and failure of memory do not of themselves necessarily take away a testator’s capacity and a moderate capacity is all that is required. Id. at 77.

The crucial time is the moment of the will’s execution. The events prior to and after the will signing are easily challenged on relevancy grounds. Rightfully so, the will’s witnesses’ testimony become the lynch pin of validity. Depositions are necessary to extrapolate the facts surrounding the will signing. Information should be sought concerning the state of the decedent at the time of signing, the method in which the testator acknowledged their understanding of the will and its dispositions, the level of detail utilized in explaining the will, whether the will was signed by the decedent or by someone else at the decedent’s direction, who arranged for the will’s drafting, who actually drafted the will, how long the witness had known the decedent, where did the signing take place, and who was else was present. Answers to these questions cannot be ascertained merely from the witness’ signature appearing at the bottom of the will.

In situations of estranged family members and care takers, the opportunity to produce a will to an infirm testator and perform a make shift will signing before two strangers as “witnesses” can arise. Devises omitting family members, outside the “natural objects” of the decedent’s bounty, and in unequal shares can be effectuated under such circumstances. The will’s witnesses hold the key to determining testamentary capacity at the moment of signing.

The burden of proving undue influence is upon the person asserting it and must be clearly established. Gellert, 5 N.J. at 71. Undue Influence is defined as mental, moral, or physical exertion which has destroyed the free agency of a testator by preventing the testator from following the dictates of his own mind and will and accepting instead the domination and influence of another. Haynes v. First Nat’l State Bank of New Jersey, 87 N.J. 163 (1981). The first element necessary to raise a presumption of undue influence is a confidential relationship. Id. at 176. Such relationship arises where trust is established by reason of the testator’s weakness or dependence or where the parties occupied relations in which reliance is naturally inspired or in fact exists. Id. However, a confidential relationship does not exist where the parties deal on terms of equality even though they may be family members or business associates. In re Codicil of Stroming, 12 N.J. Super 217, 224 (App.Div. 1951).

Undue influence is an overcoming of the free will of the testator. This makes the events leading up to the will signing absolutely relevant. If undue influence is present, it will likely be the beneficiaries exerting the mental, moral, or physical exertion which destroys the testator’s free will in their favor. The beneficiaries themselves and omitted persons can shed light on the existence of any potential confidential relationships. These relationships often evolve when an elderly person becomes dependent on others for care. It is important to determine whether the testator was kept away or shielded from friends and family during this period. If so, arguably, a confidential relationship with the opportunity to undermine the relationship and exert influence existed. Suspicious circumstances can arise from unnatural or unequal dispositions, frequent changes to the will, reports of abuse, use of the alleged influencer’s attorney to draft the will, and strained familial relationships.

If a confidential relationship and suspicious circumstances can be clearly established, the burden of proof shifts to the will’s proponents. It is then your adversary who faces the difficult task of proving free will.

Our law firm has been serving the Hoboken and Wayne areas since 1972. We have a long list of satisfied clients who have found the legal solutions they were looking for at Scura, Wigfield, Heyer & Stevens, LLP. We invite New Jersey residents as well as anyone out of state with assets or family members in New Jersey to contact us to schedule a consultation with one of our lawyers.