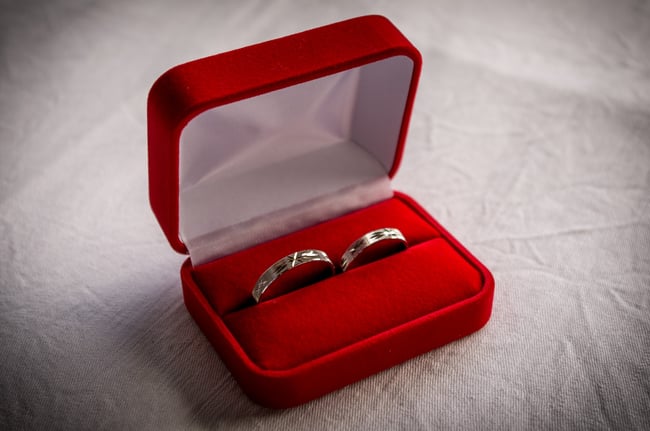 On the outside, it might appear obvious. The ring is a gift. Moon’s fiancé is uninvolved in the bankruptcy process and is not filing for bankruptcy. Ergo, the ring would belong to her, right? Well, not exactly. The ring does not technically belong to the fiancé. It still belongs to Moon.

Arguably, the most important case in New Jersey in regard to engagement ring ownership is Aronow v. Silver, 223 N.J. Super. 344(Ch. Div.1987). To set the scene, days before the wedding took place, the engagement was called off. The court then determined who owned the various assets given in contemplation of marriage – most relevant to this case being the engagement ring. The issue at first appeared to be who broke off the marriage, but as the case progressed, the court determined that conditional gifts, such as the engagement ring, are returnable if the engagement is broken, as the ring was provided in anticipation of a wedding that did not take place. Courts since then have used this as a precedent, citing the legal decisions of other courts that establish the gift belongs to the giver – or donor.

Ultimately, this case decides one thing: if Moon files for bankruptcy prior to his marriage, the ring belongs to him and can thus be liquidated as a part of the bankruptcy process.

Under normal circumstances, so long as the marriage ends up taking place, the engagement ring will remain with the person who received it. In bankruptcy, however, things become slightly more complicated. Chapter 7 Bankruptcy requires the liquidation of assets that belong to the debtor, which, in this case, includes the engagement ring, since, as mentioned earlier, until the marriage takes place, the ring belongs to Moon.

Surprisingly, this is not the first time in a bankruptcy case where an engagement ring hung in the balance. In the Ohio case In re Wilson, 210 B.R. 544, 546 (Bankr.N.D.Ohio 1997), an engaged debtor filed for Chapter 7 Bankruptcy. The debtor’s fiancé gifted her an engagement ring, which she did not list in her petition. Upon uncovering the engagement ring, the bankruptcy trustee tried to turnover the ring, but the courts ruled that the ring, being a conditional gift, did not belong to the debtor until after the marriage took place.

In re Wilson is an example where the ring could not be liquidated if it were given to the debtor. Moon’s situation is entirely the opposite, so what happens when the debtor gave the ring rather than received it? In re Hicks, Not Reported in B.R., 1998 WL 70721 (Bankr.N.D.Ohio 1998) is another Ohio case that featured an engaged debtor filing Chapter 7 Bankruptcy. In this case, the court ruled the debtor had to turn over the two engagement rings given as conditional gifts. However, since one ring was sold, the court also claimed that all profits from one ring’s sale be turned over to the bankruptcy trustee.

Moon’s position, so far, appeared grim. Given what we understood about liquidation law, he gave the ring to his fiancé, but now he’d be required to return the ring if he did not marry her prior to filing bankruptcy. The possession of the one engagement ring depended entirely on whether the conditions upon which the ring was given was fulfilled.

There is no denial that Moon owns the ring. In the event of a Chapter 7 Bankruptcy, he’d have to turn it over to the trustee of his bankruptcy case. However, there remains one possible way he can retain this asset: constructive fraudulent transfers. A fraudulent transfer is when a debtor tries to deliberately reduce the amount a creditor will receive in a bankruptcy case. However, a constructive fraudulent transfer occurs when a debtor receives less than reasonably equivalent value for property transferred for the benefit of creditors.

With Moon, the question becomes not whether the engagement ring counts as his property, but whether or not him surrendering the ring will cost him more than it will help him. If Moon can prove that liquidating the engagement ring would be a constructive fraudulent transfer, then he might be able to retain the ring.

We have confirmed that Moon owns the ring, making it his property, and that the ring was given within two years of filing the initial bankruptcy prepetition. In order for Moon to keep his engagement ring in a Chapter 7 Bankruptcy, we would need to prove the following two qualifiers: if he was insolvent as the time of transfer or as a result of transfer and that the debtor received less than reasonably equivalent value for the ring.

The term “insolvent” is defined in bankruptcy law as if “the sum of the debtor's debts is greater than all of the debtor's assets, at a fair valuation.” N.J.S.A. 25:2–23(a). In order to determine this, this begs the question: if Moon were to liquidate his engagement ring, would he lose equity or gain equity? What will he lose by selling his $30,000 engagement ring?

One thing worth considering is this: is the prospect of a loving, legal bond between two people for as long as they both shall live equity in a bankruptcy case? As it turns out, no. Love and affection are not recognized as currency by the bankruptcy court.

In re Kelsey, 270 B.R. 776, (B.A.P. 10th Cir. 2001), a debtor-husband was put under the crosshairs of the court when he argued transferring funds to his wife’s account – who was not filing for bankruptcy – counted as a fraudulent transfer. [this is a bit confusing – is he arguing that it was not a fraudulent transfer?] The wife made the argument that, because she had quit her job, her foregoing employment to become the caretaker of her family functioned as the “unperformed promise to furnish support to the debtor or a relative of the debtor” because it included present and past support, not a mere promise of future support. The court concluded that marriage “value is limited to economic or monetary consideration, and that the care and comfort one receives from a martial relationship does not qualify.” Unfulfilled future promise does not qualify as a quantifiable value. Therefore, the case in question could not be a fraudulent transfer.

This does not function as a one-to-one comparison with Moon’s situation. However, in the aforementioned case, the debtor and his wife attempted to present marriage as an unfulfilled promise of future work, but that work, as it had no monetary or economic value in the eyes of the court, meant nothing. As mentioned before, the ring exists as a conditional gift, one given under the mutually agreed promise of future marriage. Marriage is not financially weighed by love, but rather by one person’s decision to commit to a relationship. That makes sense, but how valuable is that service in the eyes of bankruptcy court?

It is almost impossible to determine the value of a marriage that has yet to exist. To further complicate matters, an engagement ring neither is proof of a binding contract to marriage nor does Moon require the $30,000 engagement ring to be married. He can be married regardless. However, even assuming the engagement ring was required for the marriage to commence, an unfulfilled promise, much as established in the prior legal suit, has no value in determining constructive fraudulent transfers.

By this logic, if the engagement ring remains a conditional gift, then Moon will no doubt need to turn it over to the trustee upon filing for Chapter 7 Bankruptcy. There remains, however, one solution.

Get Married, Then Bankruptcy

So long as the engagement ring remains a conditional gift, the law might require it to be turned over during the bankruptcy case. Therefore, the only logical solution – and the one that requires the least legal hurdles to pass through – is to just make the ring a plain, ordinary gift. The only way to do this is to fulfill the conditional promise the ring represents, making it a complete gift.

In short, Moon needs to get married.

The ring will only need to be turned over to the bankruptcy trustee upon filing for bankruptcy. However, Moon can prepare for Chapter 7 Bankruptcy before he files it. He can marry, and upon fulfilling the promise of the one engagement ring, turn it over to his life partner as a gift, then file for bankruptcy.

In circumstances like this, sometimes it is best to chase toward that happy ending in order to achieve a mutually satisfactory outcome. Though this may be harder depending on the various debts Moon owes and how urgently they must be paid. If there is a debt on Moon’s property, then the bankruptcy process might be staving off foreclosure or something worse. In cases like these, it might prove essential for bankruptcy to occur before the wedding can commence. If Moon were to engage in such an action, it’s possible he might lose the ring promised to his betrothed.

The attorneys at Scura, Wigfield, Heyer, Stevens & Cammarota LLP can help. Please call our offices to schedule a free consultation and hear your options.