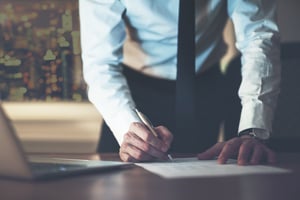 Every day new companies open their doors, employ a workforce, and provide valuable services and products to help sustain our economy.  Clearly, not all businesses are successful, particularly small businesses.  Most businesses in operation in the United States are defined as a small business, which the U.S. Small Business Administration defines as an independent business having fewer than 500 employees. Small businesses, which each are commonly undercapitalized and lacking the necessary skills to operate a business, are particularly vulnerable to the incumbent risks that all businesses face. Only about half of small businesses will survive past the five-year mark.  So, what does a business owner do when the business no longer can pay its debts as they come do?

Throwing in the towel and walking away isn’t the best solution. The purpose of a business owner creating a legal entity (typically a ) is to protect the owner from corporate claims and liabilities.  If the corporation is not dissolved following the correct process, those claims and liabilities will follow the owners even after the business has closed its doors.  Even a business that has no assets must still answer to creditors and taxing authorities.

How to Avoid Being Sued

Is an angry, unpaid creditor going to simply take an owner’s word that he or she did not receive any distribution?  Is receiving a paycheck for services rendered to the corporation considered a distribution of assets?  How about the company-paid car that the owner uses for personal use: Is that a distribution?

One way to avoid doubt as to continued liability is for the business to file bankruptcy before dissolving. In that way an independent trustee will determine if there are any assets left to distribute to creditors and recover any wrongly transferred assets.  A bankruptcy will also allow creditors the opportunity to investigate the corporation’s financial affairs for itself.

Filing bankruptcy is not the only solution for a company to orderly liquidate and pay creditors, however. In previous articles I discussed two of the more common bankruptcy alternatives: Assignments for the Benefit of Creditors (commonly referred to as and “ABC”) and informal liquidations. Other alternatives include Compositions and Extension Agreements; State Court Receiverships; and Article 9 Secured Party Sales.

Composition and extension agreements (collectively referred to a “composition”) are essentially out-of-court workouts where creditors accept less than their debt (in the case of a composition) and/or agree to modified payment terms (as in the case of an extension agreement).  This process, however, requires the creditor parties to cooperate and the consent of substantially all of the creditors to the proposed workout.  As is the case of an out-of-court workout, the debtor remains in control of the process. Compositions are most generally utilized as a means to re-organize the company but can and sometimes do provide the structure for an orderly wind down and distribution of the proceeds. A composition agreement is most viable when there is a concentration in accounts payable/creditor claims with relatively few vendors and, in practice, when creditors have been generally supportive of management.

Pros of a Composition or Extension Agreement

A composition is a more defined process than an informal wind down but less disruptive to a business when compared to a bankruptcy proceeding whereas the terms of the composition are negotiated on a purely business basis without the interference of bankruptcy procedures and bankruptcy court approvals.  Given these efficiencies, the composition process is more likely to succeed, particularly in cases where there are a limited number of creditors.

Cons of a Composition or Extension Agreement

Financing may not be as attractive to investors as in the case of a chapter 11 bankruptcy, as they may not be afforded the same protections and priority status as a DIP lender in a chapter 11 reorganization.

There may also be tax considerations as well.  Priority taxes will necessarily have to paid first in a composition whereas, in a chapter 11 plan, such taxes may be paid over 6 years (from the date of assessment).  An ongoing business may also be subject to cancellation of indebtedness income with respect to the compromised and/or modified debt, which is taxed at ordinary income tax rates.

In general, a receivership is more efficient and cost effective than a bankruptcy proceeding.  This is particularly true in cases involving fewer creditors who are all located within the same state as where the receivership action is pending.

Pros of a State Court Receivership

Receiverships are less expensive and faster than a bankruptcy proceeding since there are fewer mandatory reporting requirements and court hearings as in a typical bankruptcy case.

From a creditors’ standpoint, the advantages of a state court receiver is that the receiver replaces management.  In a bankruptcy proceeding, and particularly in a chapter 11 reorganization, present management not only remains in place, but can also be more entrenched, potentially leading to the same problems that precipitated the bankruptcy filing in the first place.

Other advantages over a bankruptcy proceeding include the fact that the receivership process is more flexible.  For example (and as in the case of an ABC), a creditor can recommend a receiver and, in some cases, the court will consider favorably the creditor’s recommendation.  This gives the creditor more control over the process.  In contrast, in a bankruptcy proceeding, a trustee is appointed from a panel.

The receivership process involves less stigma than in a bankruptcy proceeding.

Cons of a State Court Receivership

As in the case of the other non-bankruptcy alternatives, the primary disadvantage in a receivership is that there is no imposition of the automatic stay.

Unlike a bankruptcy proceeding, where all parties are joined in a singular judicial forum, this is not the case in a receivership.  In a receivership, parties are free to commence and/or continue lawsuits in alternative forums.  Even in states where an order appointing a receiver may provide a general injunction against such additional out of state lawsuits, such an order may not be enforceable in states outside the venue where the receivership action is pending.

In cases involving largely secured debt, UCC Article 9 sales may be an attractive option to bankruptcy.  Article 9 of the Uniform Commercial Code governs the procedure and mechanism of an Article 9 sale, including the conduct for such liquidation, the notice procedures and the creditor’s duty to account for the surplus funds.

The sale must be made in a commercially reasonably manner.  This is a facts and circumstances test, but an example of the factors typically reviewed include: (1) the relationship of the price obtained to the recognized market price; (2) the conformity of the sale to commercially accepted standards; (3) the utilization of a recognized market in the sale; (4) and the overall reasonableness of the means and methods of disposition under the circumstances.  See e.g. Mount Vernon Dodge, Inc. v. Seattle-First Nat. Bank, 18 Wash. App., 570 P.2d. 702 (1977).

In a properly conducted Article 9 sale and assuming the state has an Article 9 statute that provides for such relief, a purchaser of assets of a public sale takes the assets free and clear provided that (1) the purchaser does not have knowledge of any defects in the sale (i.e., improper notice); and (2) the purchaser does not act in collusion with the secured party, the person conducting the sale, or other bidders.  See e.g. Continental Insurance Company v. Schneider, Inc., 582 Pa. 591, 601 (2005).

Pros of an Article 9 Sale

Less Costly and Faster Than a Bankruptcy Proceeding.

Cons of an Article 9 Sale

In addition, it is unclear whether a purchaser is protected from successor liability.    In Glynwed, Inc. v. Plastimatic, Inc., 869 F. Supp. 265, 273 (D.N.J. 1994), the Court held that successor liability may exist and that UCC §9-504 does not provide a safe harbor against successor liability claims.  Other courts have agreed with this holding.  See e.g. Continental Insurance Company v. Schneider, Inc., 582 Pa. 591 (2005) (held that the corporation’s purchase of debtor’s assets in a commercially reasonable foreclosure sale under the UCC did not bar an unsecured creditor from asserting a successor liability claim against the corporation); Equal Employment Opportunity Comm’n v. SWP, Inc., 153 F. Supp. 2d. 911, 924 (N.D. Ind. 2001)(holding that there had been sufficient continuity in business operations to make purchaser liable for judgment); G.P. Publications, Inc. v. Quebecor Printing – St. Paul, Inc., 481 S.E. 2d. 674, 682 (Ct. App. N.C. 1997) (holding that successor liability is not absolutely barred where secured creditor purchases debtor’s assets in Article 9 foreclosure sale).