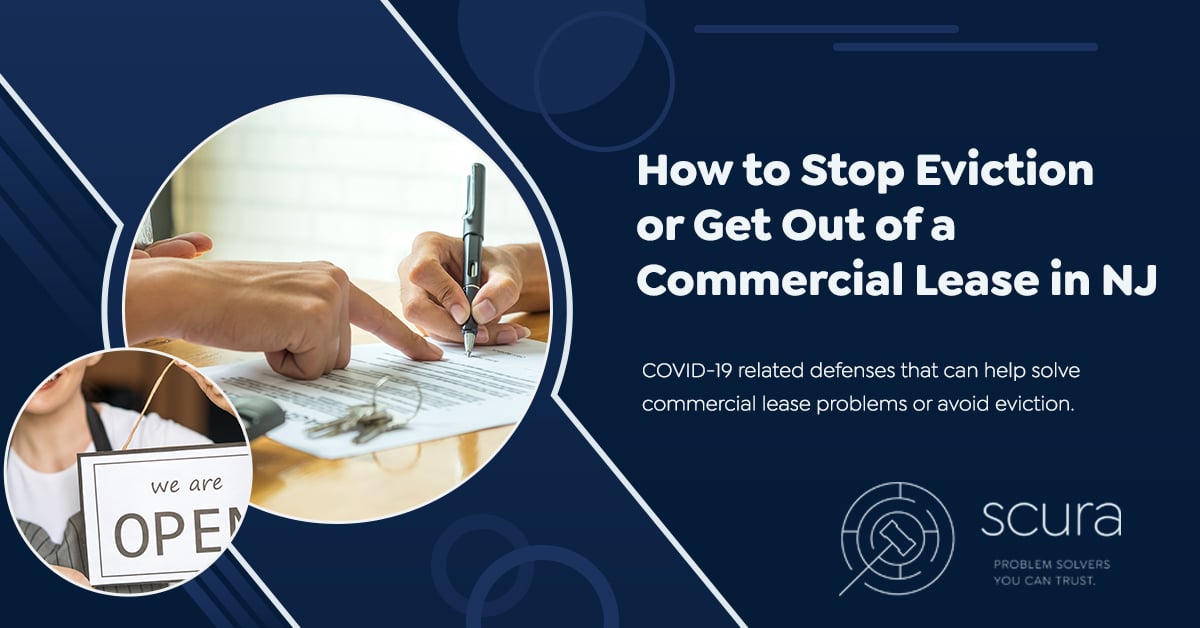 The Covid-19/Coronavirus Pandemic has created a new defense to commercial leases and contracts into our legal landscape in New Jersey. Many businesses are unable to pay on their leases or perform on other business contracts because the Coronavirus has shut down their operations. The pandemic has led to customers not showing up to businesses or led to their complete shutdown by virtue of Governor Murphy in New Jersey ordering certain businesses to close because of the likely spread of the virus in such businesses as restaurants, gyms, spas, salons and other public places. The spike in the fall of 2020 has led to both the individual states and Federal Government issuing orders that shut down or severely limit business operations. What can a business legally due to stop evictions from commercial landlords or to defend a lawsuit because it cannot perform under a contract due to the coronavirus limitations?

New Jersey Potential Defenses to Contract/Leases due to Coronavirus

In New Jersey, the courts recognize the well-established principles surrounding the doctrine of changed circumstances, more specifically, impracticability of performance and frustration of purpose. The basis of the doctrines “apply to certain situations in which a party’s obligations under a contract can be excused or mitigated because of the occurrence of a supervening event. The supervening event must be one that had not been anticipated at the time the contract was created, and one that fundamentally alters the nature of the parties’ ongoing relationship. Both the impossibility and frustration doctrines are concerned with “[a]n extraordinary circumstance [that] may make performance [of a contract] so vitally different from what was reasonably to be expected as to alter the essential nature of that performance.” JB Pool Management, LLC v. Four Seasons at Smithville Homoeowners Ass’n, Inc., 431 N.J. Super. 233, 245 (App. Div. 2013 (citing Second Restatement at § 261 and § 265).

Let’s look at the facts of the JB Pool Management cited above. In that case, a Pool Management company sued a condo association for failure to pay under its pool maintenance contract over a four-month time period. During the term of that contract, mold infestation was discovered in the pool, which prompted government officials to order the pool closed for over seven months while the mold was remediated. Even though the government ordered the pool closed, the pool management company sued the association for breach of contract, seeking to recover four months of service fees that the association had not paid while the pool was closed.

The Appellate Division in New Jersey recognized the impracticability of performance and frustration of purpose as a valid affirmative defense that the condo association could raise based on the government shut down due to the mold.   Looking at our present pandemic, the government shutdowns should certainly be permitted as a valid defense to the inability of a commercial tenant to pay a landlord or to excuse performance under a contract by a party if the coronavirus led to the non-performance in some way.

At the Time of the Contract Could the Parties Have Reasonably Anticipated the Changed Condition?

The Court’s analysis, therefore, hinges on whether the condition “is of such a character that it can reasonably be implied to have been in the contemplation of the parties at the date when the contract was made.” Petrozzi v. City of Ocean City, 433 N.J. Super. 290, 303 (App. Div. 2013). “Impossibility or impracticability of performance are complete defenses where a fact essential to performance is assumed by the parties but does not exist at the time for performance.” Id. at 302. While the doctrine of impossibility of performance will excuse a party from having to perform when performance has become literally impossible, or at least much more difficult, because of the occurrence of a supervening event that was not within the original contemplation of the contracting parties, under the related doctrine of frustration of purpose, the obligor’s performance can still be carried out, but the supervening event fundamentally has changed the nature of the parties’ overall bargain. JB Pool Management, 431 N.J. Super. at 245-46. “Even if a contract does not expressly provide that a party will be relieved of the duty to perform if an unforeseen condition arises that makes performance impracticable, ‘a court may relieve him of that duty if performance has unexpectedly become impracticable as a result of a supervening event.’” Facto v. Pantagis, 390 N.J. Super. 227, 231 (App. Div. 2007).

In deciding whether a party should be relieved of the duty to perform a contract, a court must determine whether “the existence of a specific thing is necessary for the performance of a duty” and “its … destruction, or … deterioration … makes performance impracticable[.]” Id. “If the contract contains no words of express condition to either party’s duty of performance, the court may have to fill the gap and determine whether the continued availability of certain means of performance should be deemed a constructive or implied condition.” Id. “[T]he concept is that a contract is to be considered ‘subject to the implied condition that the parties shall be excused in case, before breach, the state of things constituting the fundamental basis of the contract ceases to exist without default of either of the parties.’” JB Pool Management, 431 N.J. Super. at 245-46.

Similarly, in the Petrozzi v. Ocean City cited above, the State of New Jersey enacted a law making performance impossible by Ocean City under a contract with homeowners that had beach front properties. In that case, Ocean City entered into easement agreements with homeowners that had ocean front property to maintain the dunes a certain height so it would not block the homeowners’ view. When Ocean City failed to maintain the height of the dunes and it blocked their view, the homeowners sued Ocean City claiming it affected the value of their property. Yet, well after the original contract between Ocean City and the homeowners, the State of New Jersey enacted a major change to its law under the Coastal Area Facility Review Act concerning dune maintenance requiring certain permit approvals. Ocean City’s application for a permit to change the dunes was denied and it could not perform under the contract. The Appellate Division held that impossibility was a valid defense that could be raised as to the lawsuit by the homeowners because the parties could not have foreseen a change in the law at the time of the original contract. In so ruling, the court reasoned:

Specifically when dealing with a subsequent government act, “[i]f the performance of a duty is made impracticable by having to comply with a domestic or foreign governmental regulation or order, that regulation or order is an event the non-occurrence of which was a basic assumption on which the contract was made.” Restatement (Second) of Contracts, supra, § 264.

What If There is not a Force Majeure Clause in the Contract?

Many times the courts look for a force majeure clause to see if performance may be excused. Regardless, the courts recognize that even in the absence of a force majeure clause, certain types of unexpected occurrences, such as a power failure, are of the kind of unexpected occurrence that may relieve a party of the duty to perform if the availability of electricity is essential for satisfactory performance. Facto v. Pantagis, 390 N.J. Super. at 231. Events that comprise the category of changed circumstances are generally those due either to “acts of God” or to acts of third parties. Restatement (Second) of Contracts § 261 cmt. d (1981).

Under New Jersey law, frustration of purpose excuses nonperformance under a contract where “after a contract is made, a party’s principal purpose is substantially frustrated without his fault by the occurrence of an event the non-occurrence of which was a basic assumption on which the contract was made, his remaining duties to render performance are discharged, unless the language or the circumstances indicate the contrary.” Unihealth v. U.S. Healthcare, Inc.,14 F. Supp. 2d 623, 634 (D.N.J. 1998). When an unforeseen event affecting performance of a contract occurs, such a clause will be given a reasonable construction in light of the circumstances. Even in the absence of a force majeure clause, absolute unforeseeability of a condition is not a requirement to the defense of impracticability. Facto v. Pangis, 390 N.J. Super. at 231-32.

Taking and applying these principles in light of the coronavirus pandemic, a defense may be raised to a landlord’s eviction action on a commercial lease that the payments under the lease should be excused. For example, in New Jersey, Governor Murphy, by way of executive order, closed bars and restaurants completed from March until June 2020 from having any patrons in doors. Then, in June businesses were limited to 25% capacity in doors. We have many clients that suffered a total loss in business as a result of these government orders. Businesses such as restaurants, bars, nightclubs, gyms and spas have been devastated by these governmental ordered closures.

How can these businesses be expected to pay a hefty lease payment in light of this government shut down? This is the exact type of unforeseen event that should excuse performance. How could the parties to the lease or contract possibly have foreseen that there may be a pandemic that would force the government to totally shut down businesses? The answer to that question is quite simply that they could not have possibly foreseen this pandemic and the business shutdowns. Our firm is providing advice to clients to use these defenses in either negotiating new terms or defending evictions or contract actions. The same defenses should be utilized in the state court and the bankruptcy courts in trying to come up with a fair and reasonable result.

The first attempt should be to attempt negotiation with a landlord or other party to a contract to work out fair changed terms to the agreement. If that does not work, then resort to the courts or attempted restructuring in the bankruptcy court is the next option. In bankruptcy, these defenses could be raised best in a Chapter 11 or Chapter 13 reorganization. The new Small Business Reorganization Act (SBRA) that went into effect in 2020 has also led to many more strategies to save and reorganize businesses.

If your business is facing an eviction or contract lawsuit related to the Covid 19 related shut downs, please contact one of our New Jersey lawyers to discuss your potential defenses in the State Court or bankruptcy court.