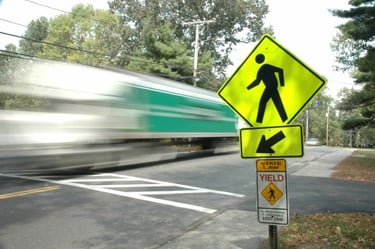 The statistics on pedestrian accidents and resulting injuries provide insight into the times and environments they’re more likely to occur.

Seventy percent of the pedestrians killed in 2011 were males. Furthermore, the male injury rates were higher than females (24 versus 20 per 100,000 in population). Another scary statistic is that 21% of the children 10 to 15 years old killed in traffic crashes were pedestrians, and 19% of those 65 and older were pedestrians.

The State of New Jersey is the most densely populated state in America with more people per square mile than any other. As a result, there’s more chance of accidents and greater pedestrian injury likely to occur. The New Jersey crosswalk law changed in 2010 to require a driver of a vehicle to stop and stay stopped for a pedestrian crossing the roadway within any marked crosswalk.

In addition, drivers must yield the right-of-way to a pedestrian crossing the roadway within an unmarked crosswalk at an intersection. The statute also imposes an obligation on the pedestrian and states that "no pedestrian shall suddenly leave a curb or other place of safety and walk or run into the path of a vehicle which is so close that it is impossible for the driver to stop or yield. Nothing contained herein shall relieve a pedestrian from using due care for his safety."

Cities in New Jersey, such as Hoboken, are especially dangerous for pedestrians because they’re so densely populated and busy. The City of Hoboken only covers roughly one square mile but has approximately 50,000 residents. It’s also right across the Hudson River from Manhattan and it brings a vast amount of traffic going from New Jersey to Manhattan.

The Judge in a civil case involving and accident with a pedestrian will give the following jury instruction to the jury to guide them in determining whether the driver of the car is at fault:

In addition to considering the general duty I have just described (Model Civil Charge 5.30 G-2), you are required to consider the following statutory provisions that involve pedestrians crossing at marked or unmarked crosswalks which are part of our New Jersey Motor Vehicle Act. They are referred to in N.J.S.A. 39:4-36 which provides, in part that the driver of a vehicle shall yield the right of way to a pedestrian crossing the roadway within a marked crosswalk or within any unmarked crosswalk at an intersection.

The driver of a vehicle shall stop and remain stopped to allow a pedestrian to cross the road within a marked crosswalk when the pedestrian is upon, or within one lane of, “half of the roadway” upon which the vehicle is traveling or onto which it is turning. Half of the roadway means all traffic lanes conveying traffic is one direction of travel, and includes the entire width of a one-way roadway.

No pedestrian shall leave a curb or other place of safety and walk or run into the path of a vehicle which is so close that it is impossible for the driver to yield or stop.

In the event of a collision between a vehicle and a pedestrian within a marked crosswalk, or at an unmarked crosswalk at an intersection, there shall be a permissive inference that the driver did not exercise due care for the safety of the pedestrian.

After being given this instruction, the jury in a civil case must determine whether the driver of the car is responsible for the accident and resulting injuries to the pedestrian. Bottom line is that if a pedestrian is in the crosswalk at the time of impact, a driver will most likely be liable if they strike that pedestrian.

Insurance Law with Pedestrians in New Jersey is Confusing

If you’re injured in a pedestrian accident by an automobile, the insurance law is complicated and confusing. If you have automobile insurance, even though you’re a pedestrian, the personal injury protection coverage under your own automobile policy may have to pick up the medical expenses. If you have no auto or health insurance you may be entitled to coverage from the state funded New Jersey Property-Liability Insurance Guaranty Association (PLIGA). You should contact a lawyer immediately if you are involved in a pedestrian accident. We have attorneys in our New Jersey offices that can answer all of your questions. Contact us for a free consultation.